The vision, passion, and determination of Hector Galindo Miranda – known in the industry simply as “Hector” – resulted in the founding of 4 Copas, the original organic Tequila. His talent in bringing together a team who shared his passion and vision of a revolutionary product experience, integrated with artfully expressive packaging and marketing, is a story worth retelling.

Hector’s vision and goal was to create the World’s Finest Tequila.

Hector’s vision and goal was to create the World’s Finest Tequila. His family had been producing bulk Tequila for other brand owners. Hector decided to make his own, and the first batches were not up to his exacting and entrepreneurial standards.  He decided that he would have to get the best scientists, master distillers and academics educated and trained in viticulture at UC Davis to help him produce a Tequila with the best aroma and taste.  The synergy of science and industry expertise gave him the ability to combine the best of nature to create the world’s best spirit product.  One of the keys was to use naturally produced organic agave yeast in fermentation.  He chose the natural process of slow cooking agave in traditional brick ovens rather than the faster processes which cheat consumers from the true agave taste in Tequila.  Hector developed proprietary purification processes as well as only using the heart of the distilled batches, taking the less desirable parts and recycling them as fertilizer after production.

In essence, Hector created a green and environmentally friendly circle of production: organic yeast, organic agave, natural slow process and selective fermentation, along with a proprietary purification process to create the world’s finest Tequila. It was also the world’s most expensive process, as organic agave is much more expensive to produce, harvest and purchase than non-organic agave. But like a true artist and entrepreneur, Hector believed the quality of 4 Copas was more important than making money.

Bottle design and provenance was equally important to Hector. He wanted to use hand blown artisanal glass that was traditional in Jalisco.  That glass is typically in one of three colors; red, blue, or green.   Hector chose blue (Azul) because it is the unofficial color of Tequila, made from organic Blue Weber Agave. The body of the glass is transparent, representing the purity of the 4 Copas.

Hector’s drive for perfection in design was also inspired by his love of art and famous Mexican muralists. Hence, he teamed with a famous artist and muralist to commission “El Charro de Agave.” Joel Rendon created the now famous mural “El Charro de Agave” to blend historical appreciation and reverence for the agave, the dead, the horse, Tequila, and the traditional Jalisco rodeo cowboy.  Hector and Rendon created the image of the traditional cowboy with an agave in place of the head and sombrero, the 4 Copas trademark on the belt buckle and branded on the horse as well as the four cups on each corner of the mural.  The Charro de Agave is featured on every bottle of 4 Copas.  Like Mexico and 4 Copas Organic Tequila, Rendon’s artwork is filled with symbolism and mysticism.

One of Hector’s goals was that he and consumers could passionately enjoy 4 Copas while not suffering for that enjoyment the next day.

He looked to his mother for that inspiration.  What Hector valued in life was tradition, friends and family.  Hector said about quality control standards:  “There are many standards of quality, but nothing like the standard of a mother.”

Hector enjoyed much success, winning competitions and the recognition of the quality of 4 Copas with high ratings in competitions and in magazines including The SF Wine and Spirits Competition and Spirit of the Year from Wine & Spirits Magazine.

The brand also became the favorite of foodies, gourmet chefs and celebrities.  But, what was most important to him was the approval of the people in his life.   He loved to tell stories of friends and family who once having tasted 4 Copas, discarded all of the other spirit products in their homes.

Also important to Hector was how well 4 Copas paired with great food. The Blanco pairs best with seafood, the Reposado with spicy foods, and the Añejo with dark chocolate

Hector held the belief that a commercial product could also be of vastly superior quality and at the same time committed to the environment.

Many brands soon attempted to follow suit and emulate or copy Hector’s passion and many vanished due to the expensive process.  Others continue to try.  But none can match Hector’s creation and the unmatched taste and story of 4 Copas. I confirm that I am of legal drinking age. 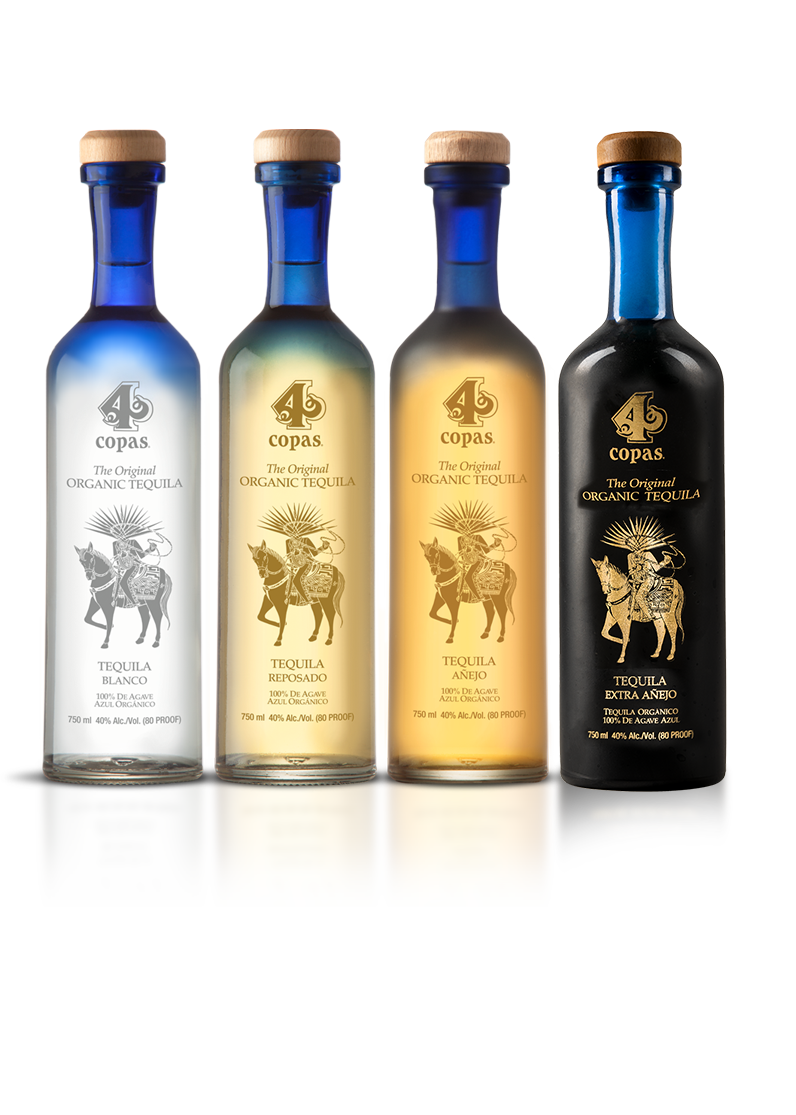